Fraser is a beautifully unique island off the south-east coast of Queensland. It is the world’s largest sand island, stretching over 120km, with rainforest growing out of the sand. The island is World Heritage listed and is a camping and 4 wheel driving mecca for many Australians and international tourists. 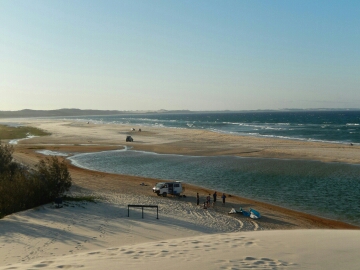 So, for our first real adventure since moving to Townsville my husband and I decided to venture forth and make the trip. We had booked just over two weeks off and travelled down from Townsville stopping at the beautiful Smalleys beach, in the beautiful Cape Hillsborough National Park, on the way.

We had booked in at the Waddy Point beachfront camping area to the north for 7 days and as we made our way over on the ferry we were very excited. 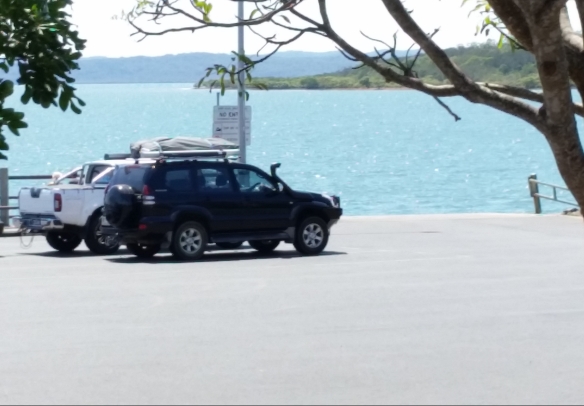 Waiting for the Ferry

We had been told by many of our friends that Fraser can be a bit difficult to drive on with lots of soft sand, soft coffee rock, dingoes and plenty of traffic (especially during school holidays). We were also told to ensure we check the tides as getting up Seventy-Five Mile beach could be a bit tricky if you got your timings wrong.

Being excited (and a little bit naive) we trundled off the ferry at Wanggoolba Creek along with a few other tourists and hit our first sand trap about 10 minutes later. To be fair it wasn’t completely our fault. We were following a car full of Japanese tourists who decided to stop in the middle of the track for a photo opportunity! So, we pulled up and immediately sank in the sand! We did realise, after being dragged out by some very accommodating people, that our tyre pressures were not low enough, first schoolboy error! We had them somewhere around 25psi and were told they should be somewhere around 16, oops! Lesson learnt, and we were off again, travelling through the sandy roads to get onto Seventy-Five Mile Beach. 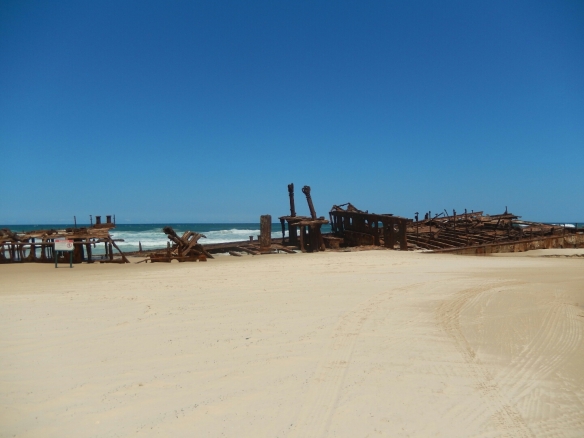 Now driving Seventy-Five Mile beach is a bit of an experience! Not only do you have to dodge other cars, the sea, tour buses and people but airplanes too! Tourist flights land on every shifting airstrips on the beach and it can be quite unnerving to see an airplane coming in to land in front of you! 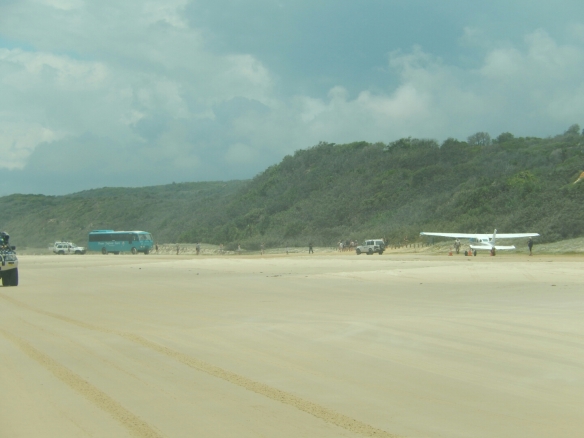 On our way up to our campsite we came across another couple who were stuck half way up Indian Heads. They were towing a camper trailer and drove a Patrol (yep Toyota’s are forever pulling Patrol’s out of trouble). We stopped to assist (with our limited Pozzie knowledge) and got them out and on their way up. It just so happened that they ended up camping next door to us and thus a friendship was born.

Fun in the Sand

With our new-found friends we explored the northern end of Fraser, enjoying the sun, sea and sand. We also explored a few tins of xxxx and the odd wine bottle, (well it would be rude not to!). We thought it would be a good idea to travel over to the other side of the island and visit Wathumba Creek.

Wathumba Creek is a beautiful place, just picture perfect with white sands and turquoise water, good fishing and abundant marine life. We spent the best part of the day exploring this area and swimming in the beautiful pristine waters. On our way back, our new-found friends told us of another beach which was, if possible, even more beautiful than Wathumba.

They pulled over and directed us to the track that led to this said beach in Platypus Bay. They told us that there was a small water crossing with a log in it then we would see the entrance to the beach. They told us we would need to gun it over the rise as the sand was soft, but it was ok there was plenty of room on the other side to slow down and get onto the beach. They would wait for us in the pub and we could catch them up there. 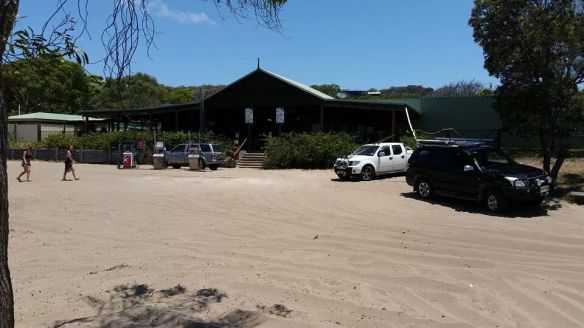 So, like good Pozzies off we trundled, got through the water crossing (no drama really) and over the sand track. We did as instructed and gunned it over the rise and then ……. thump! Straight onto the beach in soft sand with the sea directly in front of us! Bringing to mind the saying “Go to the Beach”, they said – “It Will be Fun”, they said!!! Yeah right!

All the while we were keeping an eye on the tide, pretty sure it was coming in! 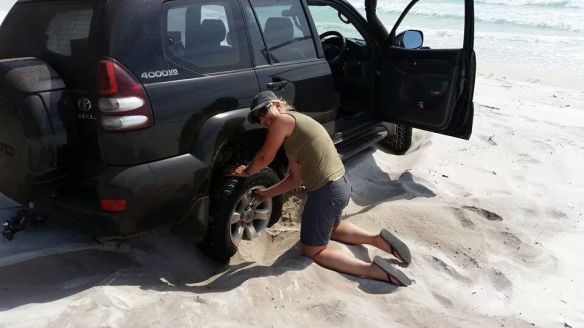 So, we dug and dug and moved the car about 25 metres!!! We were both absolutely exhausted, but knew we had to try and get out of there, so we dug some more. As a side note I must admit my husband and I worked as a team that afternoon, no arguing, no blame game just one focussed goal of getting out and getting on track (very unusual I know but we obviously function better together under stress!).

We were desperate and ready to give up and walk, we had both been digging, hauling and generally trying to retrieve the car for over two hours in the hot sun. Enough was enough! I was that hot and tired I thought I was hallucinating as I saw people coming over the sand dune! I have never been so happy to see complete strangers in my life! So, after some hysterical relief and hugs for the rescuers the guys tried to haul our Prado out of the sand dune backwards. It took several attempts and two other cars, but we got there eventually.

There are no photos of this great rescue, due to the fact that I was just so bloody knackered and stressed I did not have presence of mind to take any! But I will say we are eternally grateful to the guys and gals that got us out of that mess, they were awesome!

We headed back to camp (not the pub, we were too dirty, sweaty and knackered). As we pulled up to our camp our new-found friends came out to greet us, with a beer, dinner and platitudes of “we were just thinking about coming to look for you”, “oh my what happened”, “are you ok, we have made you dinner”, “here have a stiff drink everything will be alright”!!!!!! We had a much-needed hot shower and ate dinner, drank lot’s, laughed about our adventure, (sometimes hysterically!) and slept like little babies.

We really enjoyed our time on Fraser and enjoyed the company of the people we met there, so much so we took my parents the year after (without any mishaps). It really is a beautiful place and one I would encourage everyone to see at least once in their lifetime. We will be going back again sometime soon, hopefully armed with a little bit more experience! 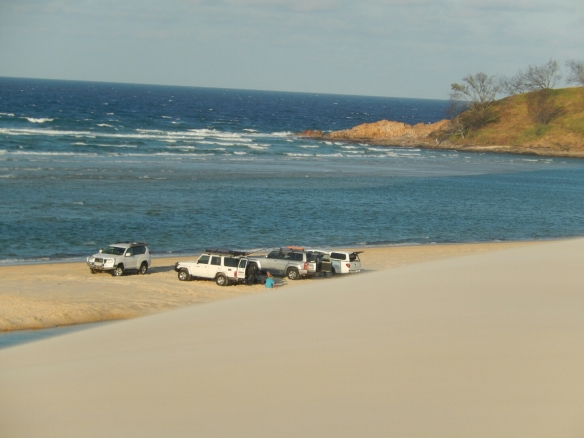